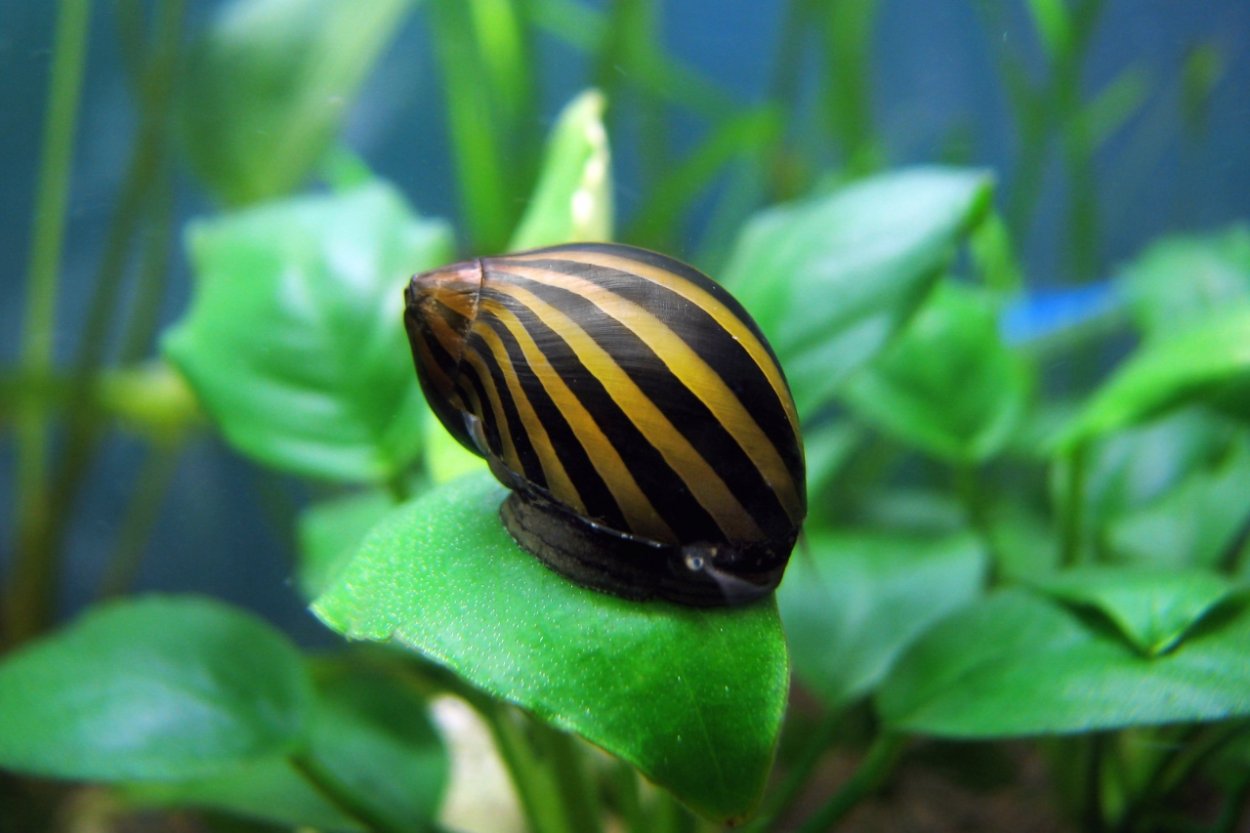 Nerite snails are famous members of the aquarium cleaning crew. They will make your tank look clean and shining by eating algae from every corner.

Nerite snails come in a variety of colors and patterns. They will add vividness and activity while moving around and cleaning the tank.

They can be easily kept with a beginner who is going to make mistakes. These snails are easy to care for, feed and breed. They are hardy and can survive in both saltwater and freshwater tank.

Their non-aggressive nature and the ability to go along with any fish species make them famous among aquarists. You don’t have to worry about the size of the tank as well. They don’t occupy much space, so it is easy to keep them in a small-sized tank.

In this guide, we will cover Nerite snail care, feeding, breeding, and much more. So, keep reading till the end. 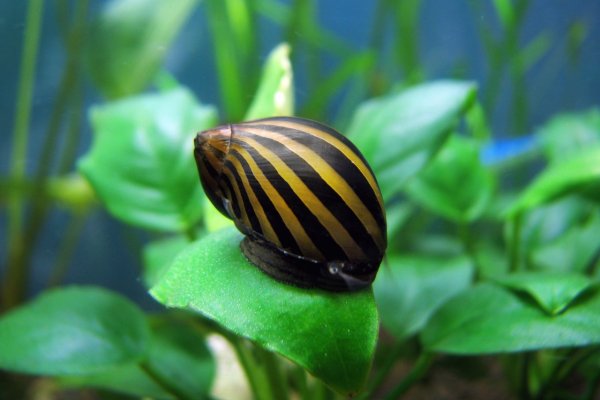 Neritidae family has 200 different species, and Nerite snails are one of them. Some of the species originated from the brackish water of Eastern Africa, so they need a mixture of both freshwater and saltwater to survive.

While the other species that need saltwater originated from the Caribbean or Pacific coast. Some species have become adapted to live in freshwater, so you won’t face any problem while keeping them in a freshwater tank.

But make sure the fishes in the tanks are non-aggressive and small. Otherwise, they will become easy prey to the larger ones.

How long do nerite snails live?

Nerite snails can survive from 1 to 2 years.

How big do nerite snails get?

Nerite snails can grow up to an inch.

Where to buy nerite snails?

They are quite hardy and are one of the famous snails who clean the tank effectively. Nerite snails are quite popular and are easily available in different pet stores. They can be bought for $4 per snail, which makes them affordable as well.

However, some of their species can be costly (such as horned snails) as they are not easy to breed in captivity. Overstocking can affect their activity of cleaning.

Snails are not as active as other algae eaters, but it makes them a good companion to others as their activity won’t disturb any calmer fish.

A freshwater Nerite snail will show different behavior in the tank. One of them is falling over. They can flip themselves back with the help of their flexible muscle foot. But sometimes, they might need a little push from you.

How to tell if nerite snail is dead?
If a nerite snail, not moving. Many people think they are dead in the tank due to their odd sleeping behavior, but it is required to double-check.

Nerite snail also needs to sleep after their hectic schedule of tank cleaning. They usually sleep once in 2-3 days instead of once in 24 hours. To work for 30 hours, they will sleep 7 times in a cycle of 13-15 hours.

The snails have a hard, coiled shell above the muscular foot that moves side by side, pushing the snail forward. They also have two pairs of sensitive tentacles that help them in identifying food and danger.

All the snails share the same shape and structure, but the color and patterns vary from species to species. A healthy freshwater Nerite snail can reach up to a maximum of 1 inch. You can identify different species of Nerite snails by their appearances.

Some of them are given below –

Nerite snail can thrive in both freshwater and saltwater habitats. But the water conditions of both habitats are the same for Nerite snails. The saltwater Nerite snails are usually found living in coastal habitats like mangroves or estuaries. 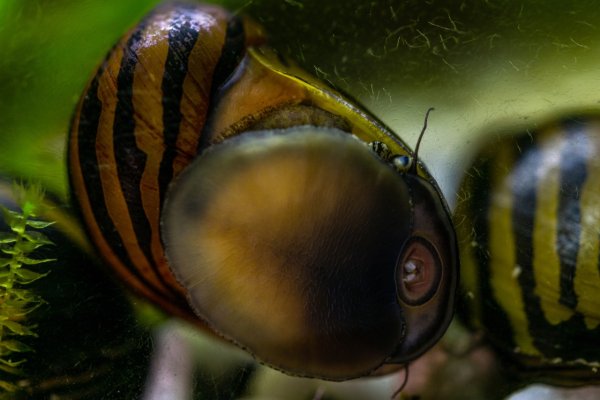 These habitats have plenty of rocks and other surfaces that can trigger algae growth. The freshwater Nerite snails are the habitat of the forests and mountain streams.

The saltwater habitat needs a salinity level of 1.020-1.028sg. Saltwater habitats also need a lot of hiding space, and you can create them using live rocks. These rocks will also help in algae growth.

In a freshwater setup, you can include plants and driftwoods for the growth of algae. The snails don’t feed on plants, so the slow-growing plants like Java Ferns will be best for your tank.

For substrate, make sure to add fined grains or sandy substrate for the Nerite snails. It will keep the sensitive antennas of the snails safe from getting scratched. You can also add calcium-rich substrate. Calcium will keep the shells strong and healthy.

You don’t need a lot of equipment for Nerite snails. A filter and a heater are enough to keep the water conditions right for their habitat. They will also reduce the levels of ammonia and nitrate.

They usually climb up the tank to reach the upper layer of water. So, make sure to lower the water level by 1 or 2 inches to let them swim on the upper levels. They can try to escape the tank as well, so keep the tank’s lids shut tightly.

How Many Nerite Snails Per Gallon?

You can keep a few snails in the beginning to learn more about their behaviors and requirements. We will advise you to keep only 1 snail per 5 gallons. It will reduce the risk of overcrowding.

How many nerite snails in a 10-gallon tank?

You can keep 2 nerite snails in a 10-gallon tank.

Nerite snails, as we all know, are peaceful and small. They will thrive best with other small and non-aggressive fishes who don’t try to eat them. The larger and aggressive fishes can scare them, and they won’t easily come out of their shell.

Any Cichlid species or the one who shares the same behavior as you should avoid them. In comparison, peaceful species like Tetras, Barbs, and Guppies are more compatible with them.

You can add peaceful species like Ghost shrimp. They are also compatible with other species of Nerite snails. Normally, the mix of these friendly creatures will be best. It will add more engagement and liveliness to the tank.

Just make sure the size of the tank and water conditions are suitable for all of them. Also, avoid adding more snails in a small tank. It will overcrowd the tank, and no one will get enough to eat.

What to Feed Nerite Snails?

Are you worried about feeding nerite snails? They usually eat algae which helps them keep the tank clean. With their sensory tentacles and radula, they detect and scrape algae off the different surfaces.

You don’t have to add anything to the tank if there are enough algae for them to feed on. But if you are cleaning the tank regularly or there isn’t enough surface for algae formation, you can add algae wafers or green vegetables.

What do nerite snails eat?

Algae wafers sink to the bottom of the tank, and snails can get them easily. For green vegetables, you can add spinach and lettuce or feed them homemade food.

Add food only if there isn’t sufficient algae formation, or you will end up overfeeding them. Overfeeding or underfeeding is never good for any creature. 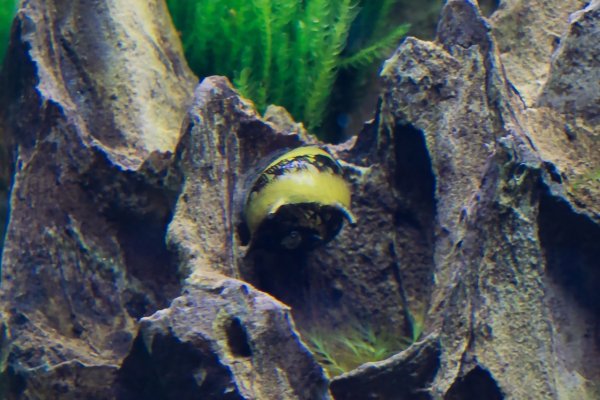 Nerite snails are strong, but they can suffer from different health problems. Most of them are easy to control, whereas others can have fatal effects if you do not properly care.

The root cause of disease in a snail is its shell. The shell can affect their health adversely if not taken care of. The change in their coloration can be an indication of poor health as well.

Sometimes the growth of the shell is halted. This can be the sign of the snails not getting fed properly. Another reason for the stopped growth is low water temperature. It can be restored or avoided by maintaining the right water conditions.

Overfeeding can cause different problems in them as well. The most common one is the discoloration of the snail’s shell.

Another problem regarding the shell is the lack of calcium. Calcium keeps the shell strong, so its deficiency can lead to its thinning, and sometimes you might notice a crack as well. In these conditions, try adding calcium supplements, and a calcium substrate is also another solution for this problem.

You might see white spots on the shell as well. These can be a sign of parasite infection. Getting either internal or external infection can be fatal for them. The adult snails often get a disease called oedema/dropsy. In this disease, nerite snail’s body fills up with fluid making them more difficult to move.

The most critical thing that you should remember is copper. It is toxic to most invertebrates, and so is to snails. So, check the ingredients before adding anything to the water. Many medicines contain copper.

How to breed nerite snails?

Breading nerite snails little tricky. You may need to know complete details about the nerite snail breeding process before many any attempts.

Most of the snails breed asexually, but the Nerite snails need both genders for the process. They are popular because the process of breeding nerite snails is difficult in freshwater. Hence tank has no risk of overcrowding.

How to hatch nerite snail eggs?

The snails can lay eggs in the freshwater, but the larvae need saltwater to survive. For successful breeding, you will need a breeding tank. You can either move the nerite snail eggs from a freshwater tank to a breeding tank or move snails to the new environment.

But don’t move a freshwater snail to the saltwater abruptly. First, move them with their previous tank’s water, then gradually increase the saline water to the tank in a couple of hours. Do this till the water level has tripled.

The breeding tank should contain as many snails as possible, and the male and female ratio should be even. The number of snails should depend on the size of the tank. Don’t overcrowd it.

Once the snails are accustomed to their new environment, they will start to breed. The females will lay eggs, and the male will fertilize them. The nerite snail eggs will spread everywhere in the tank, and in a couple of weeks, they will develop into larvae.

You should use only the sponge filter for the breeding tank as the larvae (baby nerite snails) will be small enough to get sucked by the filter.

Are Nerite Snails for you (Summary)?

Nerite snails are wonderful little invertebrates. They are available in different colors and patterns, and each of them gives a unique look to the snails. You can easily care for them and they need the least maintenance.

They can be kept by both a beginner and an experienced. They graze on algae the whole day, which helps in keeping the tank clean. You don’t have to add anything to the tank if there is sufficient algae growth.

Nerite snails are small and non-aggressive, so they will thrive if their companions share the same temperament and won’t try to eat them. If they are scared or uncomfortable, they won’t come out of their shell that easily.

Nerite snails are also easy to breed, but the larvae need brackish water. Setup a separate breeding tank. They will grow up to 1 inch. The nerite snail’s lifespan is up to 2 years if kept in a healthy environment.

They will add variation to the tank with their colorful appearance and movement.

Do you have Nerite snails in the tank? How do you care for them? What qualities do you like the most about them? Let us know in the comment below… 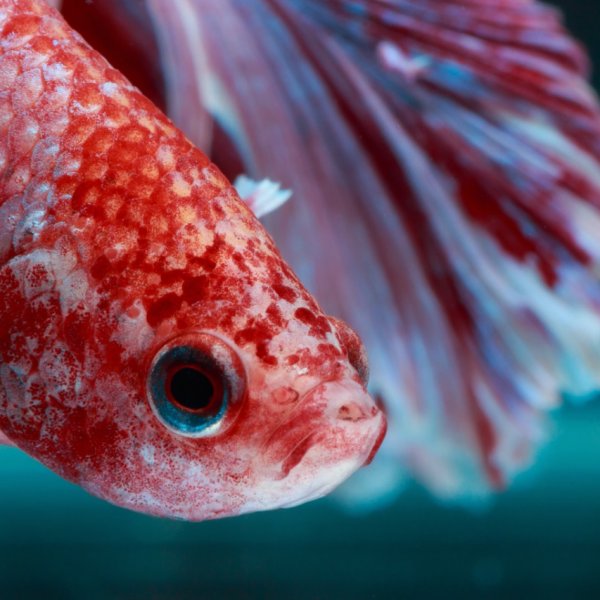 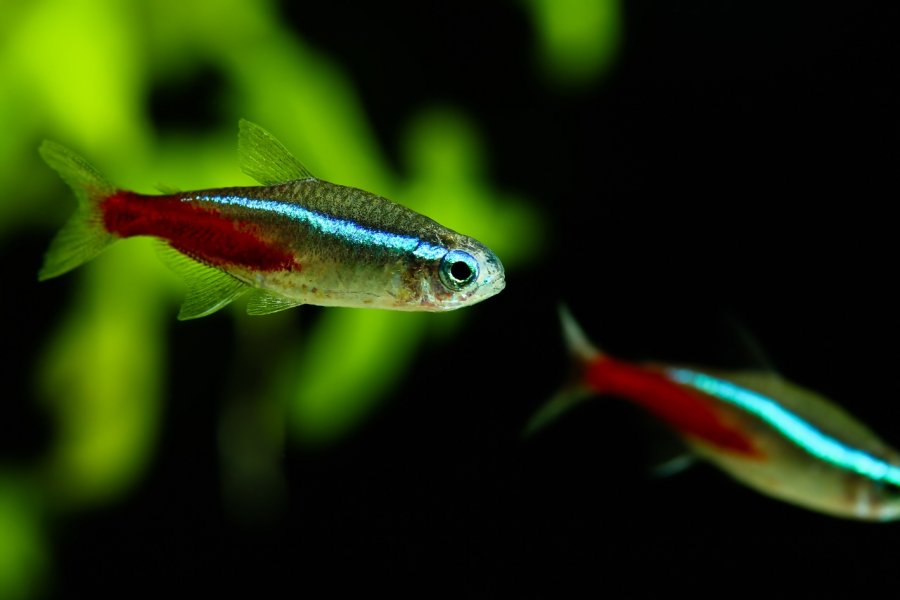 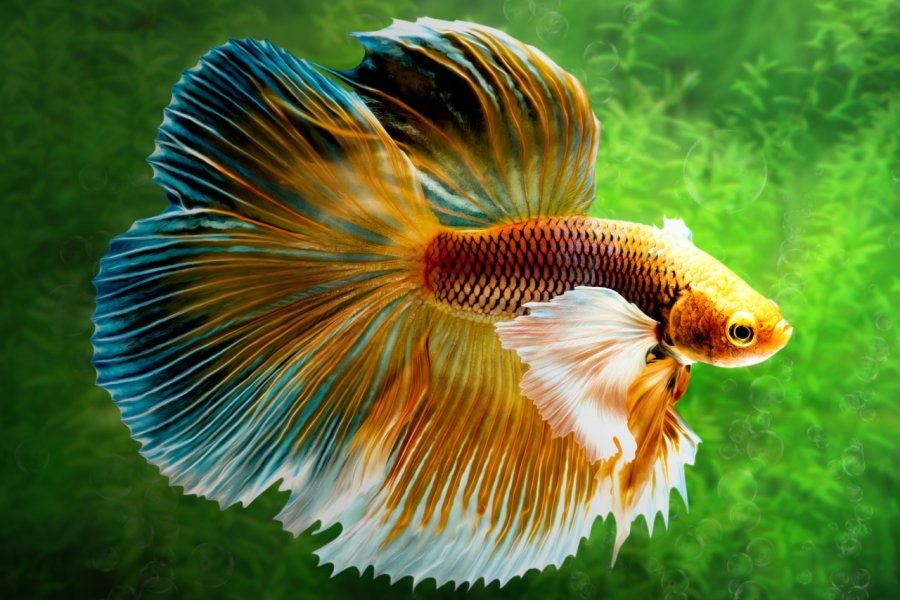 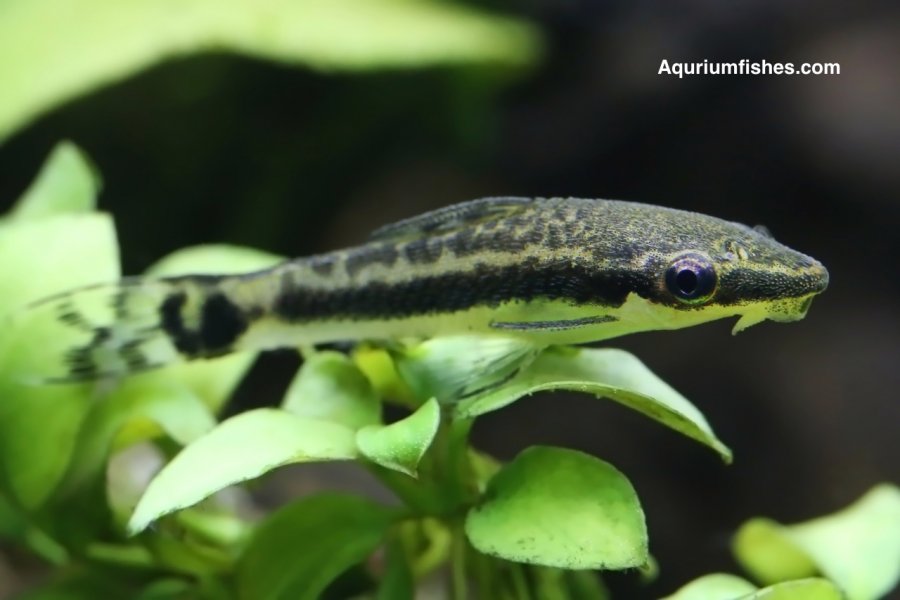 The Best Algae Eaters to Clean Your Fish Tank