Amano shrimp, the most popular shrimp, is known for its efficient ability in tank cleaning. They are gaining popularity among aquarists for the last 15 or more years. They are algae eaters, so they can clean your aquarium and maintain a healthy environment.

They are quite hardy and peaceful. It makes them a great companion for any community tank. They will be busy the whole day cleaning the tank and won’t disturb any other creature.

If you are thinking of keeping Amano shrimp in your tank, then you are at the right place. We will tell you everything from their behavior to the breeding process in this guide. Before understanding everything in details, let’s look at the table given below – 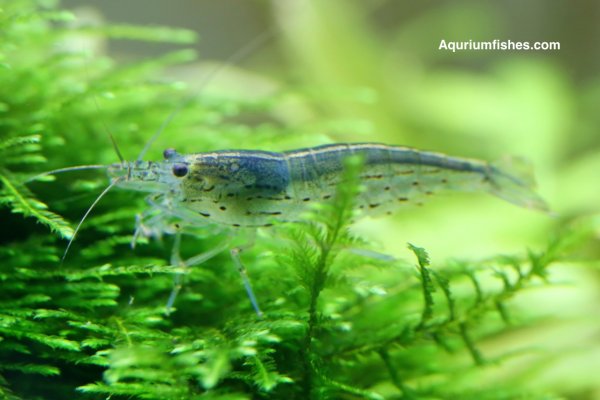 These Japanese algae eater shrimp are popular with different names. Some of them are Amano Shrimp, Yamato Shrimp, Caridina Japonica, Algae Eating Shrimp, Japonica Shrimp, etc. These shrimps were first discovered by Takashi Amano and hence the name.

They are easy to care for and require very little maintenance. They are quite famous among aquarists for their ability to keep the glasses of aquarium shining and remove algae from the little trickiest places.

They a good choice for anyone interested in keeping shrimps but is new to this hobby. They can tolerate a wide range of water conditions, so there is a good chance for a beginner to keep them alive.

They need an aquarium having the capacity of at least 10 gallons and heavy vegetation. They need a lot of hiding places in the tank as well.

Amano shrimps are non-aggressive. They only show a little competitive behavior when they are around other shrimps, and food is being served. They will be seen racing after the food.

You will find it fascinating to see the hierarchy level if there are more than one shrimps in the aquarium. The biggest or the largest shrimps will be the one who gets the hold of food first and so on.

How often do Amano shrimp molt?

They molt once a month. In this process, they shed the old shell that covers the upper part of their body. They feel quite vulnerable at this time and may go into hiding till the shell hardens.

This is the reason your aquarium should have lots of plants and hiding places for them.

Amano shrimp are ‘dwarf shrimps’ but are larger than the other species of this category.

How big do Amano shrimp get?

The adult Amano shrimp can reach a length of 2 inches.

They are characterized by their transparent or greyish appearance with a combination of dots of either red/brown or grey/blue colors running down to the end of the body.

These colors depend significantly on the type of food they are having. For example, an Amano shrimp feeding largely on algae has a green tint to the dots. But their tail, called Uropod, remains translucent.

They can disguise themselves in the background to hide from prey. You won’t be able to spot them in this situation. To find them, you can use a torch or some other source of light at night. Their eyes will shine when the lights fall on them. 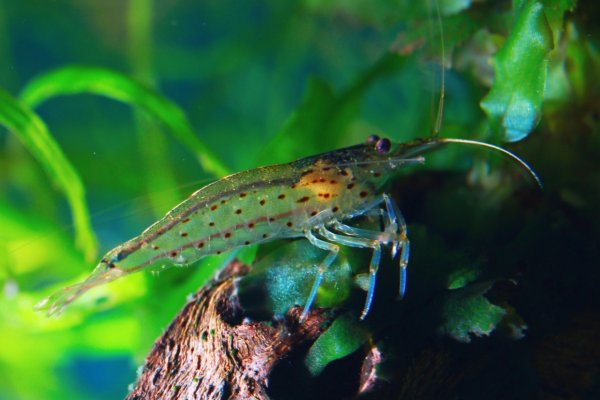 Difference between Male and Female

It is easy to distinguish between the male and female Amano shrimps, unlike their other species. The female shrimps are larger than the males and have dots on their exoskeleton.

These dots are long dashes, unlike males who have dots with even space between them. The females also carry a saddle underneath the stomach to store eggs.

This genus has 200 different species, and this is the reason they are easily confused with others. They are identical in looks, but there are many ways to tell if the shrimp you bought is an imposter or real.

The main difference is between the algae cleaning abilities of both the shrimps. They do the work more efficiently than their imposters. Another difference that you can easily spot is between their activity.

There is one more difference: the young ones of Amano shrimp need brackish water, whereas their imposters need freshwater to survive. You can look for these differences before buying them from the store.

The Amano shrimp originally belong to Asia. The large troupes of Amano shrimp can be found in the freshwaters of China, Japan, and Taiwan. But the young shrimps are not found in freshwater as they need brackish water to survive. They move to freshwater when they mature. 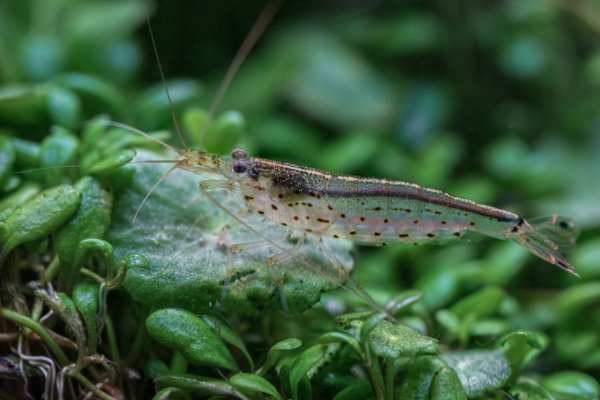 You have to plan the setup of the tank before adding shrimps in there. Also, put the shrimps to the already established tanks only so that they can feel comfortable and find algae to feed on. Following are the setting of the aquarium that you need to set up the tank –

Amano shrimp are quite hardy and survive in a wide range of temperatures. But they need a lot of hiding space so that they can hide during the molting process. You can use Java Moss and Green Cabomba or shrimp tubes to create hiding places.

Also, add driftwood to provide extra surface for algae growth. You can use small rocks or pebbles to replicate the river beds of their natural habitat for the substrate. You can also add hang-on back filters for filtration and creating a little wave in the water.

How many Amano shrimp per gallon?

A 2-gallon tank is enough for an Amano shrimp. You should give at least 10-gallon space for better movement. This space is fair enough for four shrimps.

Apart from tank cleaning abilities, they are also bred for feeding other larger fishes. Also, they are peaceful, and their shell isn’t hard enough to defend themselves. So, you have to be cautious while selecting tank mates for them.

You can keep them with other species of shrimps or snails. Also, you can add them to the tank containing small to mid-sized non-aggressive fishes. A good example of their tank mates is –

The fishes that are aggressive or have a mouth large enough to swallow your Amano shrimp should be avoided. The species that you should avoid keeping them with are Arowana, Goldfish, Large Plecos, Crayfish, Bettas, Gourami, Oscar Fish, Cichlids, etc.

The Amano shrimp should never be kept alone. They should be grouped with at least 6 shrimps that have an even number of males and females. It will reduce the chances of any dominant behavior.

They produce a minimal bio-load, so you don’t have to worry about overstocking them. You can also add other species of peaceful shrimps like Ghost shrimp and Cherry shrimps to add variety and more activity to the tank.

How long do Amano shrimp live?

Amano shrimp lifespan is 2-3 years if the aquarium is set up in the right way. They are hardy and need less maintenance as compared to other species. You can keep them in a group of single species tanks or with other peaceful species of shrimps.

Prone to copper and ammonia

They are quite sensitive to the copper element like some other invertebrates. Copper is found in many premade food and medicines as well. So, make sure to check the ingredients before adding anything to the water.

They are resilient to ammonia spikes, but the rapid changes in water conditions like pH or temperature can sometimes harm them. Also, they molt once every month. They are most vulnerable at this time, and you have to pay attention to them.

If Amano shrimp dying in your aquarium, you should test these conditions.

You can add a supplement containing protein and calcium for the faster growth of their shell.

What do Amano shrimp eat?

As we already know that they are algae eaters. They eat most of the species of algae except black beard algae. They are omnivores, but their reputation for efficient algae eaters makes people think they are fed only on algae.

This belief can lead to nutrition deficiency in them. In the wild, they feed on the plant’s debris, algae, and sometimes dead fishes. So, it is important to add variety to their diet. 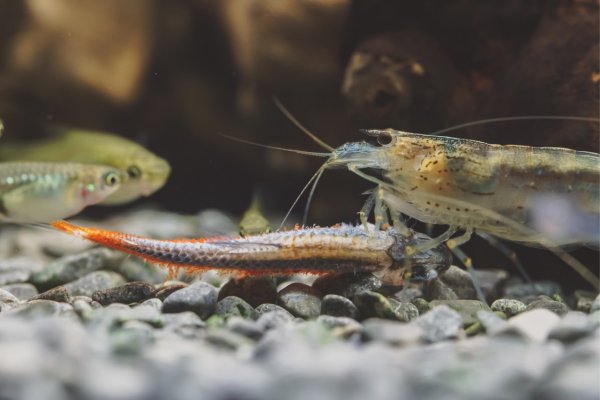 You can add algae wafers and pellets as their base food, and for supplements, you can add frozen food or vegetables to their diet.

What to feed Amano shrimp?

You can feed them squash, cucumber, spinach, zucchini, etc., and for frozen food, you can add brine shrimps and bloodworms to complete their diet.

Make sure not to leave leftover foods in the tank for more than an hour as it can start to contaminate the water. Also, they are sensitive to Copper so check the ingredients of the food before adding anything into the water.

Mating Amano shrimp is easier than breeding them. There are very few people who have successfully mated them and bred the larvae into adults. This is because of the different requirements of water conditions for both young and adult Amano shrimp.

How to breed Amano shrimp?

The larvae of the Amano shrimp need brackish water with a salinity level of around 1.024. In comparison, the adult shrimp cannot tolerate even the slight change in the water’s salinity. They need freshwater to survive.

In the wild, the pregnant Amano shrimp carries the eggs for around 6 weeks after the male Amano shrimp have fertilized them. During this period, the female keeps fanning the eggs with her tails to provide more oxygen.

After six months, the female releases the larvae into the brackish water. If you are breeding Amano shrimp in a freshwater aquarium, remove the adult shrimps to increase the water’s salinity.

Don’t worry if you are unable to breed them successfully, as it is tough to do. There isn’t much information about the breeding process also. Only the experts can do it.

This guide has provided all the necessary information regarding Amano shrimp care, natural habitat, lifespan, and breeding. They will help you in keeping the tank shining, so you must take care of their health.

If cared for well and fed healthy food, they will survive for long. They will add more variety and beauty to your tank with their appearance and activity.

They are peaceful so that they can be easily kept with other small-sized non-aggressive fishes. But avoid any fish that has a mouth large enough to swallow them.

Their hardiness makes them the best option for the one who is looking to start their hobby with invertebrates. But they are not easy to breed, so don’t lose hope if you can’t breed them.

What did you like best about Amano shrimp? Do you have one, or planning to have one? Let us know in the comment section below.